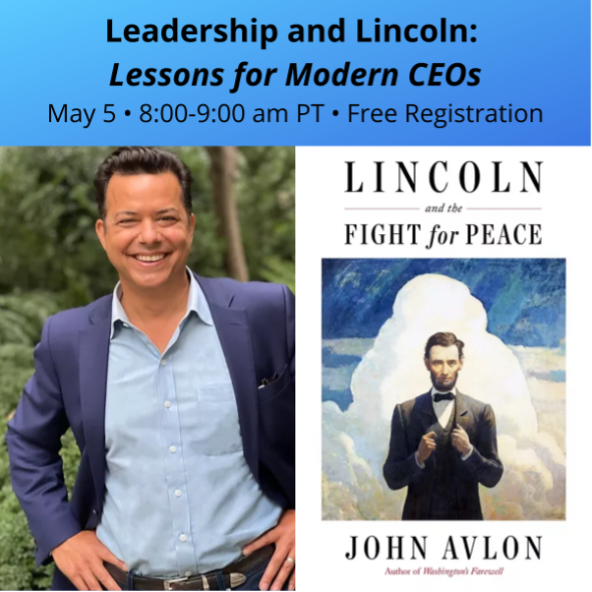 There are thousands of books about Abraham Lincoln, yet none has focused on his role as a peacemaker during one of the most perilous times in this country’s history. CNN political analyst and anchor John Avlon’s revelatory new book, Lincoln and the Fight for Peace examines the final weeks of Lincoln’s life when he articulated clear principles he hoped would guide the United States toward reconciliation. These principles would become his legacy, bringing peace to divided nations long after his death and inspiring future presidents and the world’s most famous peacemakers for generations to come.

A timely lesson from Lincoln on how to bridge our divisions today.

It is often said that America feels more divided today than at any point since the Civil War. Bitter

partisanship, tribal politics, regional, racial, and economic divides have turned citizens against one another while trust in our institutions is declining. Avlon argues that Lincoln’s example offers us a path away from polarization. His commitment to reconciliation retains the force of revelation in a world beset by radicals and reactionaries. As Avlon shows, even during the Civil War, Lincoln refused to back down from his belief that there is more that unites us than divides us—and he showed us that defending democracy is a cause that can be just as heroic as winning it in the first place.

Avlon chronicles President Lincoln’s dangerous two-week trip to visit troops on the front lines in the spring of 1865, where he witnessed combat up close, met with liberated enslaved people in the ruins of Richmond, and comforted wounded Union and Confederate soldiers. Lincoln’s example in the war’s closing days offers a portrait of a peacemaker. He did not demonize people with whom he disagreed. Instead, he used humor, logic, and scripture to depolarize bitter debates. Balancing moral courage with moderation, Lincoln believed that decency could be the most practical form of politics.  Avlon shows how Lincoln’s character informed his commitment to unconditional surrender followed by a magnanimous peace, reflecting his understanding that peace should be waged with as much intensity as war.

Lincoln’s Legacy as a Peacemaker

While his assassination sent the country careening off course, Lincoln’s vision would be vindicated long after his death, inspiring future generations in their quests to secure a just and lasting peace. Avlon discusses the numerous presidents, leaders, and peacemakers who have each found inspiration in Lincoln’s legacy—from President Truman to General MacArthur to General Lucius Clay, who, when asked what guided his decisions in the successful occupation of Germany, said: “I tried to think of the occupation the South would have had if Abraham Lincoln had lived.” Mahatma Gandhi believed Lincoln was the “greatest President of America,” and wrote, “It may be said that Lincoln sacrificed his life to put an end to the sufferings of others.”

During the Cold War, Willy Brandt – mayor of West Berlin and Nobel Peace Prize winner – made a pilgrimage to Springfield, IL, and declared: “[Lincoln] understood the spirit as well as the needs of his time, and he was possessed of that pragmatic way of thinking which is conducive to successful action and which always stands the test when anchored in firm convictions.” Another Nobel Peace Prize winner, Dr. Martin Luther King Jr. invoked Lincoln in his iconic “I Have a Dream” speech, and Nelson Mandela referenced Lincoln’s Gettysburg Address was eulogized as “Africa’s Lincoln” by his biographer.

Lincoln’s plan to win the peace is his unfinished symphony, but we can find an anthem

that can begin to bridge our divisions today in its existing notes. As Avlon writes, “We will not find another Lincoln—but he can inspire individuals with a similar spirit to carry forward his redeeming vision of reconciliation.”

Listen to John Avlon discuss his book on May 5, 2022, 8:00-9:00 am Pacific time hosted by Advantage Foundry Network (AFN) and moderated by AFN’s Chairman Stephen Kuhn. Participation is complimentary with registration. CEOs can register online here and for more information or questions email rsvp@afn.global.